NADIN AND ITS REGION 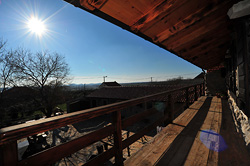 Nadine is a place of 800 inhabitants in the County of Zadar in the region of Ravni Kotari. It’s located 2 km south of the road and the railway line which from Zadar via Benkovac leads to Knin.

It’s already mentioned in the Liburnian and Roman times as an Illyrian settlement, the city of Nedinum which spreads on 4 km of spacious fields.

Nadin was probably founded during the first century A.D and has been preserved until today. We can see the remains of its city walls, built from large blocks of stone to the height of 7 meters, as well as the monument consecrated to the goddess Latra, who was especially worshiped in Nadin by the Liburnian tribe, and are among the most valuable findings excavated here.

The ancient city of Nadin has not been yet fully investigated and the archeological work has not been done systematically but more or less at random. In the Archeological Museum of Zadar, are kept some inscriptions and some have been inserted within the walls of some houses below Nadinska Gradina. The importance of Nadin can also be witnessed by the long struggle led by Venetians and Turks for having the control on the “key district of Ravni Kotari”.

In the recent history, after the war of 1995th, which had been finished off by the famous war action "storm", began the process of planning the reconstruction of the villages which had been completely destroyed, as well as the restoration of the church of st. Ante.

"The church of Nadin will keep bringing up faith in humanity, as it always has, and the people of Nadin will return to their rebuilt homes and love each other," this was stated in January 12th 1997th by the Archbishop of Zadar msgr.Ivan Prenđa. For the occasion,the resident Sime Odzakovic made to the church the gift of a new altar and an ambon and the Municipality of Medulin a new roof construction for the church.

A longtime tradition of growing vines in Nadin, spread out on spacious 360 acres of vineyards, has contributed to the certification of growers and winemakers, making Nadin the most ecological and ”the biggest vineyard” place in Croatia.

The importance of environmental awareness and the cultivation of agricultural and wine culture were witnessed by the royal couple of Sweden King Carl XVI Gustav and Queen Silvia when they came in the village of Nadin on 18.4.2013.